I know things about my lawyer I absolutely should not know. He’s 55 years old, likes listening to Creed, and screams like a little girl when riding rollercoasters. He also relaxes with new age spa treatments and is thinking about getting an electronic nose hair trimmer. And that’s just the start.

Now, let me be clear: I’ve never spent a single moment outside of the office with this guy (and, for what it’s worth, I’d just as soon not be privy to his personal grooming habits). I learned all these things by tracking his social footprint across the Web — and odds are, he has no idea he’s left such a vivid trail behind.

In our age of social sharing, we expect some of our thoughts to be public. But as we slowly put more and more of ourselves online, specialized search engines are making it easier than ever to pull all of the pieces into a highly detailed (and, some would say, slightly creepy) profile of our virtual lives. I’ll let you in on a little secret, too: It isn’t always a pretty picture. Just ask my lawyer.

The Depths of the Deep Web

You hear a lot of terms bounced around when you talk about this growing breed of stalker-friendly search engines. Some like to be called “social search” utilities, while others prefer the phrase “people search.” Many boast their ability to delve through the “deep Web” that even Google doesn’t touch.

“Even though most people think the size of the Web is basically the Google crawl index, there’s actually a lot of information that Google doesn’t crawl,” says Harrison Tang, founder and CEO of Spokeo — which, taking a goulash-like approach to its identification, describes itself as a “social people search engine” service.

Spokeo, like its competitors Pipl and CVGadget, is designed to let you dig up the dirt on friends, foes, or anyone in between. Spokeo goes a step further than many of the other services, though, by actually importing your entire address book.

Then, for a few bucks a month, it continually monitors your contacts and lets you know any time anyone’s done anything new, anywhere online. (The site’s home page even promises to help you “uncover personal photos, videos, and secrets,” including “juicy” and “mouth-watering news about friends and coworkers.”) While each individual bit of information may seem insignificant, the cumulative effect of seeing it all together in a neatly packaged portfolio is enough to give almost anyone pause.

Spokeo’s system uses your contacts’ e-mail addresses to track their activity on a few dozen services, ranging from basic blogs and social networks to a slew of photo and video sharing sites. That means the random photos of your kids you shared on Flickr two years ago (or perhaps those less innocent images from your spring break trip a decade earlier) will pop up right under your name, seconds after someone searches for you.

Less obvious sources such as Amazon Wish Lists, Pandora playlists, and movie rating sites fill in the colorful details you likely didn’t realize were out there at all — things like my lawyer’s affinity for new age jams and nasal maintenance. While I found Mr. Attorney’s age on an old MySpace profile and his rollercoaster customs on a personal YouTube video, it was Pandora that divulged both his cravings for Creed and his suggested usages for the “Spa Radio” station he had created. As for the nose hair trimmer, he can thank his Amazon Wish List for sending that shudder-inducing tidbit my way.

For Sale: Your Information 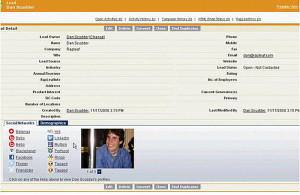 Other services are accessing that same data, then selling your information as a part of marketing research. One of the most visible such examples is Rapleaf, a company that describes its services as “data and people lookup.” Clients pay thousands of dollars to have detailed social profiles compiled from their own customer databases. As is the case with Spokeo, the information is all publicly available — Rapleaf just brings it all together.

“Things that people have posted are out there for anyone to come and see,” says Joel Jewitt, Rapleaf’s vice president of business development. “As long as you’re not going beyond that, that’s within the privacy norms today.”

Most of Rapleaf’s clients, Jewitt says, are simply trying to understand how to use social media more effectively for marketing. An auto manufacturer, for example, might want to know which car models its customers are checking out and discussing on social Internet services. Rapleaf would use the company’s list of customer e-mail addresses to crawl the Web and track down the info, person by person.

“It’s pretty standard Web spidering,” Jewitt says. “We recreate in an automatic way what someone from the general public would be able to do if they were looking.”

Whether targeted at businesses or individuals, the services all have one thing in common: Unlike the public record-driven search tools of the past, this new wave of people tracking utilities builds a highly detailed dossier solely with information you published yourself — a distinction that often seems to create a certain sense of discomfort.

“What it does is make the ubiquity of the Internet and the sheer openness of the world tangible,” says Internet privacy expert Kevin B. McDonald, executive vice president of Alvaka Networks. “It makes the whole concept of the world-sharing of information and the ‘no walls’ approach that the Internet was designed for very real to people.”

That reality can be chilling in any number of circumstances: a curious client, a boss big on background checks, or an obsessive ex. A recent study found half of British Internet users admitted to using the Internet to stalk a former flame. Knowing how easily your every electronic move can be monitored, no doubt, adds a new dimension to the idea of fixation.

“It is a little ‘stalkery,'” says Marc Rotenberg, executive director of the Electronic Privacy Information Center. “If the information is distributed, that’s actually a form of privacy. When it’s gathered up in one place, it creates some new risks.”

Rotenberg also takes issue with the idea that a company could use your personal information to turn a profit. “The fact that someone’s made something public doesn’t mean that someone else can sell it,” he contends. “I would say even with affirmative consent, if there’s going to be a market for personal data, the user should get some percentage of whatever value the data has.”

The thing to remember, of course, is that these services aren’t doing anything illegal — the information they’re gathering is information anyone could find, provided they knew where to look and had the time to do it. Rather than ignoring the king-sized file that may have been collected on you, then, McDonald suggests you use it as a tool to understand and control your online identity.

“I’ve come to the point where rather than be driven by the Internet, I intend to drive it as much to the degree that I can,” he says.

One way you can get behind the wheel is by turning the tables and using these services to search for yourself. Spokeo lets you see a limited amount of data without subscribing, Pipl and CVGadget are totally free, and Rapleaf offers an open tool to manage your Internet footprint.

“You can come in and sign up and see all the things that we found about you,” says Rapleaf’s Joel Jewitt.

Once you know what kind of info’s out there, you can decide whether you want to remove it. If you do, here are some steps to consider:

1. Rapleaf offers the option to opt-out of its services.

By entering your e-mail address on this page, you can have your data permanently deleted from Rapleaf’s database. There’s no charge, and once you respond to Rapleaf’s confirmation message, your information won’t appear in the company’s reports ever again.

2. Many of the other services, Spokeo included, update their caches based on your external settings.

In contrast to Rapleaf’s opt-out method, Spokeo and many of the other services work the same way a standard search engine does: If the content disappears from the Web, it also disappears from the search results. That means you need to visit the individual sites connected to your e-mail address and adjust the privacy settings within each one. In the case of Spokeo, the info will stop showing up in searches within about a week once you do that.

3. Most sites do give you an option to make your data private. It just might not be obvious.

You’ll usually need to go within the individual sites’ account configuration pages, then look for the privacy options to adjust for your comfort level. Some places to start:

• Amazon: Wish Lists are made public by default. To change that, go to this page and select the option to sign in. You can then view any Wish Lists associated with your account and designate them as private.

• Facebook: Once signed in, look under the “Settings” tab at the top of the page to find the privacy control panel. Click the “Profile” option to set parameters for who can view your content.

• MySpace: Click the “My Account” button at the top of the page after logging in, then click on “Privacy” to adjust your settings. Bear in mind that your age and location are typically displayed publicly even if your profile is set as private, as was the case with my lawyer.

• Pandora: Your playlists are public unless you specify otherwise. Once logged in, click on “Account” at the top of the page, then follow the option to edit your profile info. From there, you’ll see a checkbox you can select to make your profile (and thus your playlists) private.

These are just the steps for a few of the sites we’ve mentioned in this story. The important thing, should you decide to rethink your level of privacy, is to start by searching so you’ll know which sites you need to reconfigure. In the end, the power is ultimately in your hands — you just have to switch off the autopilot and take control.

“All you can do is learn to live with it,” McDonald says. “That’s the confine of the world that we live in.”