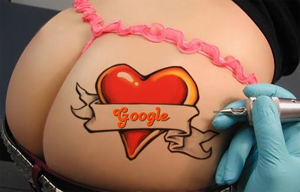 Ladies, consider this your warning: Google is emotionally immature.

Ken Auletta, New Yorker columnist and author of Googled: The End of the World as We Know It, says the search engine “lacks emotional intelligence.” And, as most of us guys have been told, that’s something the fairer sex tends to frown upon.

We got to thinking, and we realized Google has plenty of other problems in the metaphorical realm of relationships. Sure, it may be able to find your G-spot — but in the long run, it’ll leave you hurt and unsatisfied.

Here are seven reasons why Google would make an absolutely awful boyfriend.

1. It’s constantly trying to get in other people’s pants.

With all the women carrying around Android devices these days, Google’s phones are cozying up to countless coozies. You can forget about monogamy.

How many times have you been left disappointed by Gmail being down? And remember, there’s no phone number you can call to get answers — even when Google goes flaccid, it never offers oral service.

3. It may have a big index, but it doesn’t always know how to use it. 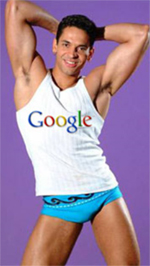 We fellas may be obsessed with the size of our prize, but a big bishop isn’t always enough. Google’s got the girth, all right — its index is estimated to be in the tens of billions of sites — but half the time, you still can’t get what you need from it.

4. It doesn’t even use protection.

When you’re with Google, you always have to make sure you’re sporting your own protection. Otherwise, you never know what kind of virus you could end up contracting.

5. It only wants one thing.

Once Google’s seen your “information,” it’ll move on to its next conquest. If you think you’re going to experience the high of the courtship again, sister, you’re in for a rude awakening.

6. Even when things go well, it’s over really fast.

Let’s face it, Google’s services are famous for finishing the job in fractions of a second. Even the world’s worst minute-men can outlast that.

7. It’s obsessed with balls and manholes.

How else do you explain #8 and #12 in this list of Google interview questions?